A downloadable game for Windows

Zen and the Art of Transhumanism is a cyberpunk pottery game about improving the human race through technology.

(Gamepad has a little issue with the pottery UI buttons, if problematic, switch to keyboard, sorry!)

A game by Deconstructeam made for Ludum Dare 35, theme: Shapeshift.

i really enjoy it. Very original.

okay I think I will download some more of your games. They are amazing.

If this is a reference to the book I believe it is, then I think if this is meant to be an outgrowth of its thoughts, then I don't think you got what you intended. The point of quite a bit of how the book talks about motorcycle maintenance is about how there is no one 'right way' to do it, and that the best way to do so is to just do it and not follow steps.  Which means that the overlays completely remove that quality (heh) of discovery. I understand why for a game you would need specific designs with parameters, but perhaps have an element of discovery to them?

As an aside, I did also have some technical issues with this game, mainly revolving around the controls. I was using a gamepad to play, or, I was when I could. On the computer to cycle through the different designs my analog stick wouldn't work to cycle, so instead I had to jump to my arrow keys. Also, on the actual pottery segment the buttons would fairly often press themselves more than once, and other times not register a press at all.

For all those who didn't know, the book I believe this game to be referencing is 'Zen and the Art of Motorcycle Maintenance' which I wholeheartedly recommend

this is a neat free thing. for those who liked this make sure you play Red Strings Club. It's a brilliant game

A strange mix of emotions based on anger and love makes me feel for this game, and for this "robotic" girl (Social freedom for AKARA's now!) a great desire to just reflect. Thank you, Deconstructeam.

for me is working 64bit Window10

Not sure why, but the game doesn't work for me! It opens to a glitchy screen and never goes beyond it.

Fun little game. The music and the art style is great!  Thanks for making this game.

Really love this game. Short and sweet, with a lot of story depth, I thought. I wish the clay/lathe were a tad bigger, making the molding just a little slower (more zen?) but less finicky. Or maybe that was just me not using full-screen.

A lovely little game! I read this as a parable of capitalism--if you truly gave your customers what's best for them, they'd stop coming back. I was expecting a twist ending where you lose your job, and my more cynical side was disappointed not to see this. There's also a deep irony in the game developer: without a little ambition, where would this game be?

I really want more of this sculpting mechanic - the thematic atmosphere of the game makes me come back to sculpt again and again. I wish the game was longer - What other upgrade modules could exist to improve an individual?

i hope theres a sequel in the next door, maybe a more desire human with more complex problem. i love the pottery art!!!

... well the first part anyway. before the drinking puzzles

I loved it so much. Not just because of the Cyberpunk aesthetics, that came up via the color palette,  the pixel art itself and the wonderful soundtrack, but also because of the relaxing gameplay in combination with an intriguing 'short story'. Here I'm asking myself again in the aftermath, if you already know that you'd mix that bit into "The Red Strings Club"... I remember playing it in the middle of a night and I felt so wonderfully 'careless' afterwards. It's a bit like this Ludum Dare 35 entry cleared my soul for a second, and that was a stunning experience. That's why I didn't just write an article about it as well as upload a gameplay video, but also included it in our GOTY 2016 list. <3 Thanks again, Deconstructeam - you are always a shining light in the masses of jam entries. :) And congratulations to the 24th place as well!

I can't turn my tools. Help?

If your tool is turned downwards, it means you have to spin the turn table that the pink object is on.

doesn't work. closes upon start up

i wish this could be made into a bigger game Really cool tone and feel, mechanics that I tried so far are good, but the games a little broken with gamepad. Can't go through designs, sometimes fails to go through other nav trees.

Biggest problem was the end button being right next to the tools, on gamepad it's way to easy to press end while going for a tool, and that made the game so frustrating I straight up quit.

Cool game, and I love the graphics! Please feedback something from my collection, thanks. :)

Game looks real cool, but on startup it glitches out. Was hoping it was an interesting way to start the game, but I dooon't think games start like this lol

Woow so cool! I wish I did that glitch haha. I don't know how that happened or how to fix it, sorry :S Maybe trying to redownload it?

Tried that a few times! But it's cool, I ended up watching a playthrough! 10/10

so after you do the original clients you find the screen sliding upwards to open a tunnel, is there anything after that or is it the end of the game?

This is the end, beautiful friend.

I cant comment on the story or anything but the clay/ ceramic shaping is a great tool. I throw pots on the wheel (learning) and this definitely helped me!

Zen and The Art of Transhumanism is a thought-provoking game set in a cyberpunk world. It raises questions on the nature of humanity over its short length, and the ending is a corker.

Great work team, keep it up!

ever think there will be a mac port for this game? i would really like to play this game, but i don't have access to windows software

Had a blast streaming this. I would buy an expanded edition if this winds up getting the Gods Will Be Watching treatment!

I was pretty happy to see a transhumanism themed game, and the pottery angle grabbed me as unique. While I can't say I share the same philosophy presented in the game (hell, on the account of the game dev, I outright disagreed with the "proper" course of action) I have to say this was overall a really pleasant, positive, and aesthetically pleasing experience. Working the pottery wheel was really relaxing, the abstract shapes you create are like freewriting or inkblots, they're pieces with little/no objective meaning that are not only really intuitive to create, they're also totally interpretive, and you can really get a lot of feeling out of so little - the Empress, especially, but maybe that's just because I'm a tarot fanatic.

The weakest part of this game was probably that it was a bit heavyhanded in its narrative. I think a lot of that comes from this being a game for Ludum Dare - thus it was made in a shorter span of time and is a shorter game. I think if it were a longer game it could've been expanded to include more mods and more possible ways to help each person. But maybe I'm just saying this as the idiot who gave the blogger The Knight so she could beat the crap out of her harassers.

I think there's a really solid foundation here, especially mechanically, and some people will definitely resonate more with the Zen themes than I did. It's ironic I played this on Father's Day, since my dad would've loved this. Definitely worth picking up again sometimes just to mess around with the pottery wheel.

I loved this game, well executed concept and cute to boot :)

I found that was an very interesting concept. It's the first time I saw pottery integrated in a game and I'm not dissapointed !

Here is my let's play:

A very cool way of looking at things i think. I'd rate this 8/10 mainly because it's a bit short in my opinion. would have loved to see more.

My file broke during initial launch. Do you have a fix?

Very interesting and fun game. :) My only complaint is the spinning of the pottery wheel. My poor spacebar gets enough use! Thankfully, I just mapped a macro to my mouse.

The potter was so cute! Has anyone done fanart of him? :)

I think this game is amazing! It's a perfect example of how a short and well designed game can convey a remarkable experience.

so basically transhumanism is the shortcut to enlightenment.nice,relaxing game. 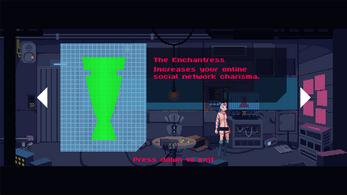 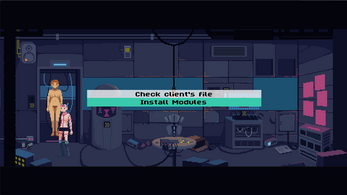 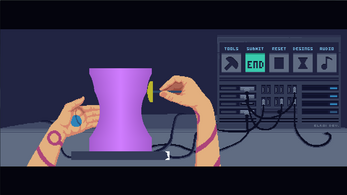 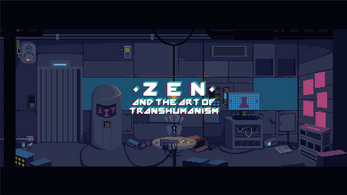